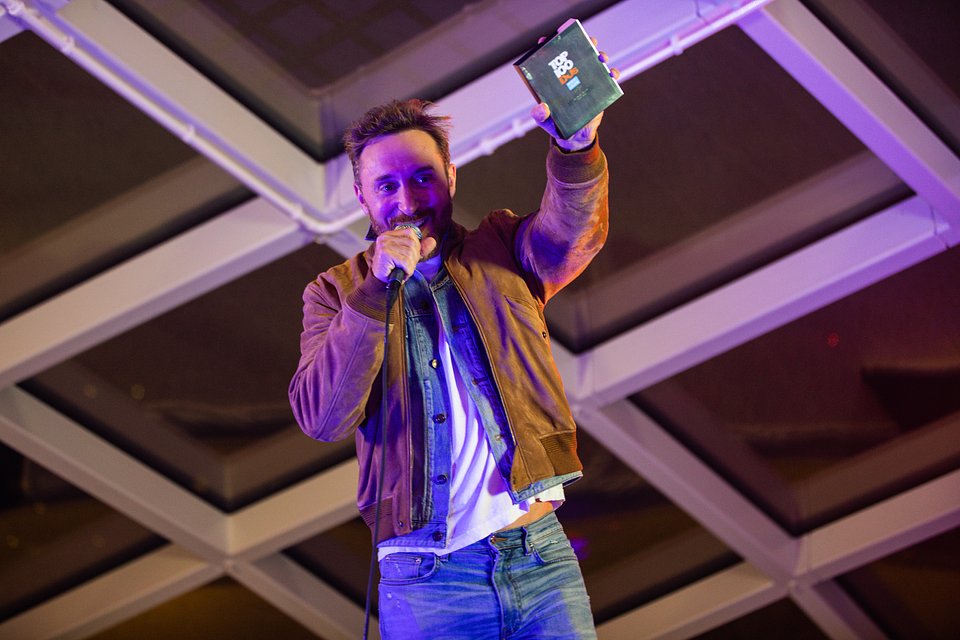 David Guetta has been voted the world’s favourite DJ by fans voting in DJ Mag’s Top 100 DJs Poll for the second year running, capping off another incredible year for the French artist. Testament to the relentless work he put into keeping his fans entertained and engaged throughout the pandemic, this award is the culmination of an intense purple patch of activity and creativity for Guetta.

He maintained an epic level of quality for his live streams during lockdown, hosting his series of United At Home sessions. These included an unforgettable virtual concert from Paris’ Louvre Museum on New Year’s Eve in aid of Unicef and French food package charity Restos du Coeur and a follow-up show at the Burj Khalifa in Dubai, raising $2 million in donations across all of his United At Home streams. Then once clubs and festivals finally reopened, he brought joy to fans by playing one of the first comeback gigs in Las Vegas (“that night will certainly go down in history for me as one of my favourite shows” he says), as well as EXIT in Serbia, Creamfields and Isle Of Wight in the UK, Untold in Romania and in France.

There was never dull moment on the production front for him during this difficult period either, scoring a UK #3 hit with ‘Heartbreak Anthem’ alongside Little Mix and Galantis and other smashes including ‘Bed’ with Joel Corry, ‘Remember’ with Becky Hill and Hero alongside Afrojack. He also released a 2021 remix of his classic ‘Memories’ after it unexpectedly went viral on Tik Tok and a massive rework of Shouse’s ‘Love Tonight’. He went from strength to strength with his underground-focused Future Rave project alongside Morten. Their ‘New Rave’ EP made a huge impact with its fierce uncompromising sound, winning him many new fans, and he celebrated 10 years of his massive ‘Titanium’ collaboration with Sia by releasing new remixes, including a mindblowing Future Rave version. He also returned to his uncompromising Jack Back alias for ‘I’ve Been Missing You’ with Ferreck Dawn and Guz.

“I’m so proud to be a part of this amazing industry and can’t express my gratitude to everyone who voted me your #1 DJ for a second year in a row” says Guetta. “It means so much. I’ve been working really hard this year, we took United at Home to new heights, finally reunited on the dance floor and I’ve released more music than ever. It’s been amazing to play new music live and the energy and reactions from the crowd is what keeps me going after all these years. Music is my passion and to be able to live that everyday is all thanks to fans. I’d like to thank all of the artists and producers I’ve been working with the past year and for supporting my music. We’ve built a culture with my Future Rave sound together with MORTEN and Future Rave 2.0 is on the way. After being back on stage, at clubs and festivals, I have the feeling that dance and electronic music is coming back stronger than ever.”

There’s still plenty more to come this year from Guetta too. Keep your eyes and ears peeled!
About David Guetta
There are artists and entertainers who achieve stardom and popularity, but few have the influence and endurance to redraw borders between genres and reshape the industry’s dynamics. “When Love Takes Over,” the first single of his 2009 album ‘One Love’, hit #1 in the UK, the Guetta- produced Black Eyed Peas song “I Gotta Feeling” became a worldwide hit, topping the charts in 17 countries. Over the decade since, Guetta’s success has been off the charts. Globally, he’s racked up over 50 million record sales, whereas his total number of streams is over 10 billion. He has received numerous Platinum and Gold certifications, was named ‘EDM Power Player’ by Billboard, and won two Grammy Awards out of six nominations. Besides his hard-won DJ skills, he is prolific in the studio, and works with artists like Madonna, Rihanna, Lady Gaga, Snoop Dogg, Martin Garrix, Usher, Sia, John Legend, Nicki Minaj, Sean Paul, Kelly Rowland, Showtek, Avicii, Ne-Yo, and Akon, for starters. His seventh studio album titled ‘7’, included huge electronic pop tracks like “2U” with Justin Bieber, “Flames” with Sia, “Don’t Leave Me Alone” with Anne-Marie, “Goodbye” with Jason Derulo, Nicki Minaj and Willy William and “Say My Name” with J Balvin and Bebe Rexha plus a second disc of underground dance tracks, recorded under Guetta’s Jack Back alias. With his wide-reaching and game-changing approach, he is more than just a DJ and producer: he’s made dance music reach the mainstream, fused urban, electronic and pop music into new popular genres, and managed to stay on top of the game for decades. David Guetta is surely not done with showing the world his incredible sound and it is safe to say that at this stage in his career, David knows exactly where to take it next.
CONNECT W/ DAVID GUETTA
Instagram | Facebook | Website | Spotify | Soundcloud | YouTube