Oliver Heldens is back with a new cross over single, featuring luscious vocals from the multi dimensional rising star, Anabel Englund, that is primed to dominate the festive season. A match made in heaven, it’s a surprise it’s taken the pair this long to combine their prowess’ in the form of a collab—but clearly it’s been well worth the wait. 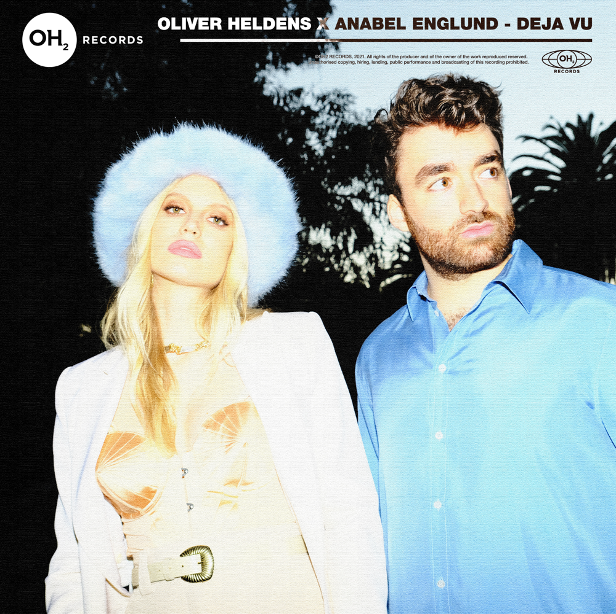 LISTEN HERE
A phat bassline groove with a rugged edge provides the backbone of the track along with typically punchy Heldens beats which are serenaded with Englund’s honeyed tones, which combine as the perfect foil! The breakdowns and pre-choruses shine with muted chords, while the sunshine-drenched feel of the main hook is no surprise given that Englund lives in LA. “Working with Oliver has been so effortless and fun” she says. “This song happened so beautifully and I can’t wait to share it with the world.”
“When I first started working on this track in early 2019 I tried a couple of things for the vocals with different singers and songwriters, which were good, but I knew it could be better and more special. I’ve been a fan of Anabel’s music since 2013, and even more so during this pandemic hearing all of her new music, I knew she could be perfect for this track, so I sent the instrumental to her and luckily she was really into it and she came back with an amazing topline idea for the track. We then met up in LA to finalize the song and recorded some extra hooky melodies, and after that, we were both even more convinced about this record, so we moved around some things in our release schedules to make this song our top priority because we think the world needs to hear it! Enjoy! :)”, said Heldens.
Anabel Englund has previously collaborated with the likes of MK, Jamie Jones, Lee Foss, Dombresky, and Yotto. She has scored four consecutive US Dance Airplay #1 singles over the last  two years. She was nominated for iHeart Music’s Dance Artist Of The Year in 2020 and dropped her debut album ‘Messing With Magic’ on MK’s AREA10 label. A true house music tastemaker, Anabel’s truly gorgeous vocal performance is the perfect compliment to Heldens’ addictive grooves.
The single comes off the back of Heldens massive rework of Roger Sanchez’s house classic ‘Another Chance’, as well as his techno offerings under his revered HI-LO moniker ‘Hypnos’ and ‘Hera’ on Drumcode which followed  his critically acclaimed remix of Nina Kraviz’s ‘Skyscrapers’. As always, Oliver has remained busy on the live front, with his own huge headline show at Printworks in London and headline festival appearances at EDC Las Vegas, Escape LA, and Seismic Dance Event.
About Oliver Heldens
Oliver’s career has been a whirlwind of mind-boggling success ever since his breakout hit ‘Gecko’ was taken to the UK No. 1 spot with a vocal from Becky Hill, with the record receiving Platinum sales status across the globe. A collaboration with Tiesto and remixes for Calvin Harris, Coldplay, Justin Timberlake & SZA, Katy Perry, The Chainsmokers, Charlie Puth, Chic, and Jamiroquai followed, besides a plethora of popular original productions amounting to over 2 billion streams globally. After more than 25 releases under both his highly-renowned monikers in 2020, Oliver was crowned the highest and best selling Dance artist on Beatport in 2020, the #8 most supported artist on 1001tracklists in 2021 which followed his title as the #1 most supported artist on the platform in 2020, and landed in the DJ Mag Top 10 for the fourth year in a row.With the 26-year-old global superstar’s relentless tour schedule, Oliver continues to be at the forefront of the global DJ circuit bringing his eclectic, high-octane sound to major festivals including Coachella, Lollapalooza, EDC, Tomorrowland, Ultra and more.  Heldens continues to release various club records through his label Heldeep Records and radio tracks via RCA Records as well as host his weekly radio show, Heldeep Radio, which is syndicated across 106 stations, in 74 countries and reaches  145 million people a week.

About Anabel Englund
Singer, songwriter & DJ Anabel Englund’s sound is entrancing in its dichotomy; bright and carefree with her authentic Southern California breeziness. Other times she is irresistibly alluring with her dark, smoldering touch. The 2020 iHeart Music “Dance Artist Of The Year” nominee explores the dynamics of that captivating contrast with her debut album “Messing with Magic”.The Los Angeles-based artist spent late 2019 and all of 2020 putting out singles  from “Messing With Magic” leading into its formal release in December on MK’s AREA10 label with Ultra Records, with the “Messing With Magic Deluxxe” album following in 2021. Beyond four #1 US Dance Airplay singles “Waiting For You” with Yotto, “Underwater” with MK, “So Hot (MK & Nightlapse Remix)” and “Picture Us” (marking her as the first female to score four #1’s in two years), the album highlights a variety of dance floor friendly tracks and heartfelt compositions including collaborations with Dombresky, Lee Foss and Jamie Jones. During the thick of the COVID-19 pandemic while the world was on lockdown, Anabel took the opportunity to promote her music by sharpening her DJ skills and acoustic performance to perform a variety of live streams. Now represented by CAA for both US and International, catch her this season on a variety of tour dates and festival dates.
CONNECT W/ OLIVER HELDENS
Instagram | Facebook | Website | Spotify | Soundcloud | YouTube
CONNECT W/ ANABEL ENGLUND
Instagram | Facebook | Spotify | Soundcloud | YouTube