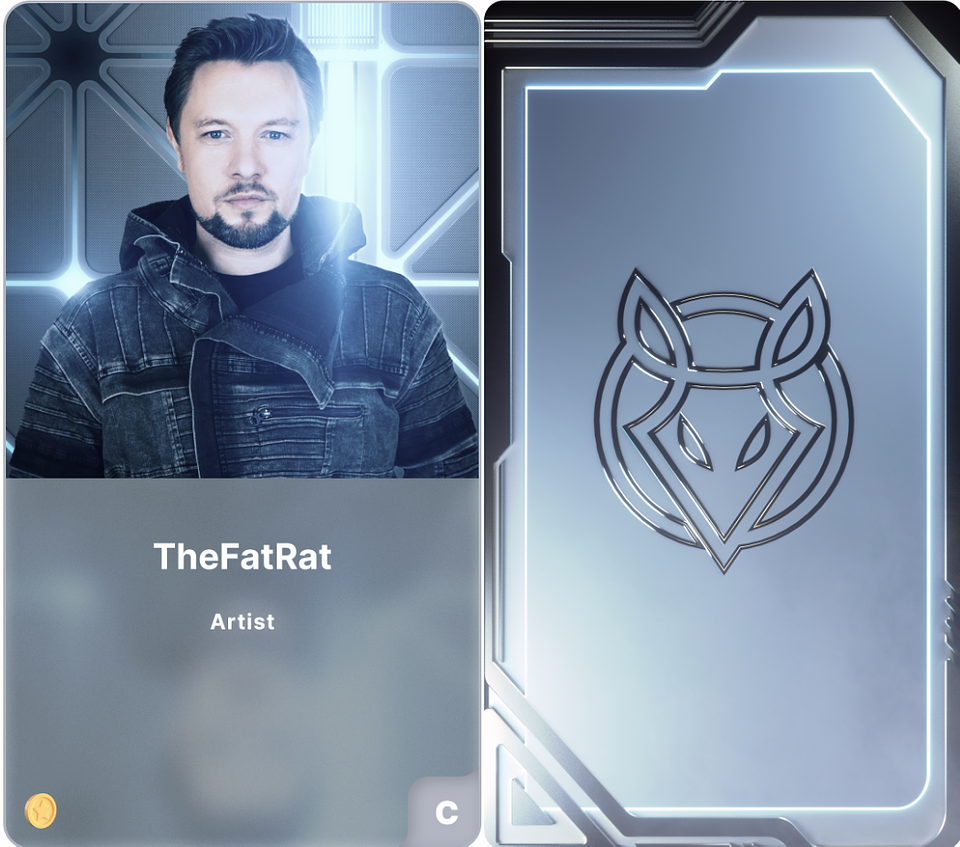 TheFatRat - Artist | Front and Back Only

Amsterdam, (December 3, 2021) - After TheFatRat revealed the launch of his own digital card collection in partnership with first-of-breed electronic music digital collectibles platform RCRDSHP to his 5.7 million YouTube fans last week, the first pack drop is out today.TheFatRat’s digital collectibles experience offers numerous twists and turns from challenges to an exclusive unveiling of his fictional universe that has been the subject of speculation amongst fans for many years. For the next 12 weeks,  gaming and music star TheFatRat is releasing one drop per week every Friday (excluding Christmas Eve and New Year’s Eve) each containing limited-edition collectibles drawn from different sets that will continue building the immersive world he has strived to create across his projects to date.

The content of the cards range from pixel art animations paired with synthwave remix loops and storylines, to character, artist, collaborator and classic track cards with commentary from TheFatRat. Following the release of his 10-track lore-filled PARALLAX album, which revealed the newest insights about his musical universe through the lyrics of each new song and artwork, each album track has been built into a digital collectible offering new ways for fans to experience the album. There are rare and legendary cards to be discovered too that reveal even more background information about TheFatRat’s universe and lore through never-before-seen behind-the-scenes footage from the creation of the PARALLAX album, an early track demo, a 3D-animated character and more. Some of the more coveted collectibles will additionally come with the utility of unlocking exciting rewards and secret IRL experiences! 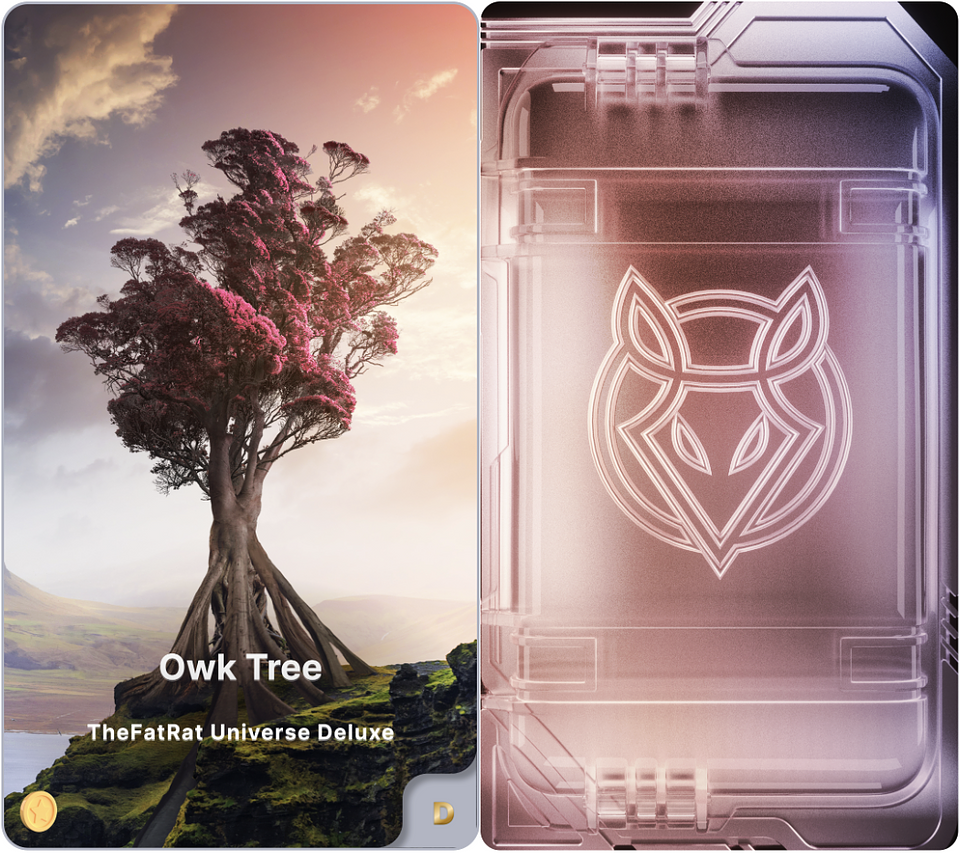 Owk Tree - TheFatRat Universe Deluxe | Front and Back Only

Speaking about his partnership with RCRDSHP, TheFatRat said, “What RCRDSHP is doing for NFTs is similar to what Binance and Coinbase did for Bitcoin. They are changing the game by making crypto technology accessible for everybody.”
It’s a way for fans to get closer to the art and mystery of TheFatRat and the all-engrossing world he has been steadily building over the last few years, and cards can be traded through RCRDSHP’s unique platform and may increase in value over time. The collection follows the release of TheFatRat’s debut album, PARALLAX, which has already accumulated over 45 million streams across Spotify and YouTube alone. After RCRDSHP’s mission to focus on NFTs and collectable digital experiences specifically for the electronic music industry, makes it the perfect partner for TheFatRat’s forward-thinking approach, and it represents one of his most exciting expeditations to date.
RCRDSHP founding partner and CSO/CCO Eric Reithler-Barros said “This is the coolest way anyone has ever seen to launch a version of an artist album and create intense fan engagement, and TheFatRat had the foresight and progressive vision to decipher the value early on. Video, music, static imagery, a mixed bag of collectibles minted in very limited editions. Unlocking in-real-life experiences to reward fans for active patronage and avid collection. These are the markers that may very well position TheFatRat to herald a futuristic new playbook of releasing an artist album.”
With over 2 billion streams to his name and a reputation as one of the leading creators of video game music, TheFatRat is perhaps the most digitally-native music producer in the game. Having created music for top-grossing games like DOTA 2 and Rocket League, released best-selling singles that have stayed in the iTunes Top 100 for 3 years straight and provided fans with incredible live experiences too, his influence and adoration runs far and wide. This new collaboration and the first official drop marks the next exciting, bold chapter in his story.
About TheFatRat
TheFatRat calls the internet his home - a nation of all colors, of young and old, of gamers and creatives, of geeks and cool kids, and certainly a nation abundant with trolls… It’s this massive and diverse group of people, his core fanbase, that have pushed TheFatRat immensely over the years, reaching a fever pitch this year.He’s found his way into the industry’s spotlight catching high praise from key influencers and press for his sound which Billboard Magazine has coined as “Wildly energetic and genre-bending electro”. He has become one of the most top-charting acts in dance music, having had multiple singles remain in the iTunes top100 for over 3 years straight. He has had his music sync-to-screen for popular video games like the top-grossing DOTA 2 and Rocket League, for advertising giants like Coca-Cola, and he has planted himself as the go-to artist for ESports brands like ESL and Dreamhack. Most-importantly, the artist’s forward-thinking approach to lift copyright restrictions on his music has led to him having been featured in 25 million videos from a range of different content creators - collectively accounting for over 30 billion unique views on the platform. Even music industry veteran Bob Lefsetz took note in his influential newsletter that “[TheFatRat represents] the power of YouTube and the power of Electronic Music.” Currently boasting one of the largest followings and most engaging fan-bases on the web for an artist in his genre accounting for 9 million fans worldwide, over 5.7 million followers on YouTube and high engagement rates with 2.2 billion streams on his YouTube and Spotify.TheFatRat also runs an imprint called The Arcadium that houses a whole range of artists hand-picked by TheFatRat whose sole quest is to consistently feed the fanbase TheFatRat grows day-by-day.
About RCRDSHP

RCRDSHP (pronounced “record shop”), is a platform for electronic music enthusiasts which markets packs stuffed with digital collectibles from global dance music artists and brands. RCRDSHP collectibles are more than crypto-glorified MP3s or digital trading cards; this is not another NFT auction or fixed-price marketplace. Each limited-edition collectible encapsulates a unique aspect of an artist, label, or festival brand’s musical worlds: a legendary video moment in front of a crowd or backstage or in the studio, a coveted exclusive track that’s never been heard before, or work of inspiring visual art that takes the fan deeper into that artist’s creative universe. These collectibles are dropped in packs, which can be unwrapped, and their content can be bought and sold, listened to, watched, or even combined using game mechanics to unlock cool, new premium collectibles and even in-real-life experiences. It’s part game, part marketplace, part community space, combined to form the foundation for a full dance music metaverse. The platform aims to lead the way in supporting artists (including smaller producers) fairly by creating an entirely new revenue stream for them, unfortunately something streaming platforms and major players still haven’t gotten right.
CONNECT W/ TheFatRat
YouTube | Instagram | Twitter | Facebook | Website | Discord | Spotify
CONNECT W/ RCRDSHP
PRESSKIT
YouTube | Instagram | Twitter | Facebook | Website | Discord | Twitch

Two greats of the Dutch techno scene unite for a fourth time as HI-LO and Reinier Zonneveld unleash the mighty ‘String Theory’ on an unsuspecting world. Following in the footsteps of ‘Saw Of Olympus’, ‘Balearic Mornings’ and ‘Existencia’, it’s another huge slice of cutti...

American dance producer The Scumfrog has done a whole lot in his career so far. Four solo albums; plenty of dance chart #1 records; collabs and remixes for the likes of David Bowie, Sting and Missy Elliot; sunrise sets at Burning Man; releases on iconic labels like Bedro...