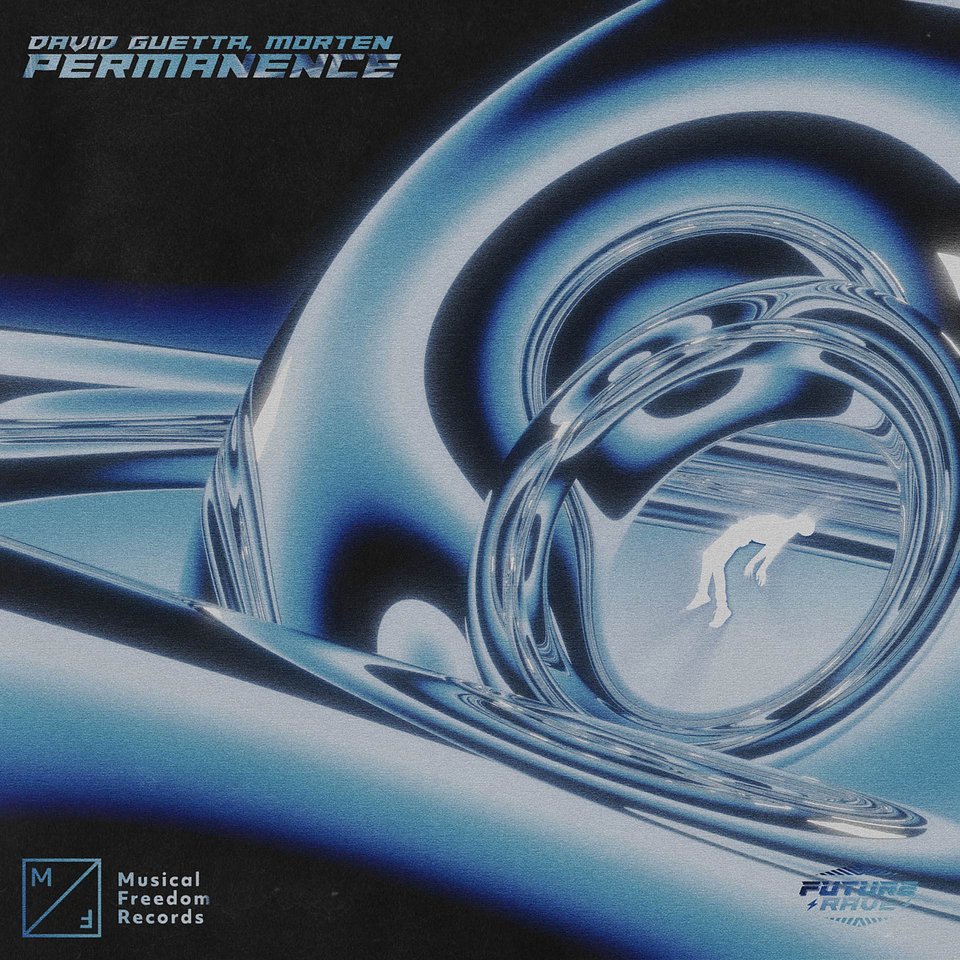 LISTEN HERE
‘Permanence’ surprisingly begins in the midst of what might usually be called a breakdown. This teasing intro takes its time, giving snatches of the lead melody while building the tension effortlessly. A subtle build slams us headlong into a dizzying techno groove, with stuttering synth blasts cutting against throbbing bass and that snarling main motif. The haunting breakdown features an ethereal operatic vocal that soars skywards, leading to a moment of tense silence. Out of nowhere comes an intense buzz of synth pressure, which loops and shudders all the way to the drop. It’s a dark, heady track that’s designed to take apart big rooms and will send your mind to an altogether different place wherever you listen to it.

“People keep asking for more, so we deliver more! It’s incredible to see the impact Future Rave has on the dance music scene and I can’t wait to continue developing it this year.” says David Guetta. On ‘Permanence’, MORTEN says “David and I have both played this track in our sets and the crowd went wild every time, I’m really excited for the track to finally be out there for them to listen to wherever and whenever they want!”

Following on from the huge ‘Alive Again’ and the Future Rave remix of David Guetta & Sia’s classic ‘Titanium’ (for its 10th anniversary), ‘Permanence’ joins an incredibly impressive catalogue from these two. Expect plenty more from this unbeatable partnership across 2022.
‘Permanence’ is out now on Musical Freedom Records
About MORTEN
MORTEN has been taking over the industry for the past year with his innovative new ‘Future Rave’ sound together with good friend David Guetta, inspiring DJs worldwide and creating an entirely new culture. He has gathered an audience of 4.7M monthly listeners on Spotify alone, releasing hit after hit with the Guetta-collab being on top 5 of the most played records in the world by DJ’s for 7 weeks. As this year’s highest new entry in the DJ Mag Top 100, and landing at #20 in the 1001 Tracklists ranking, Morten does not need to assert his spot anymore. His ability to transform his music between melodic, captivating vocals and his well known, recognized snare and bass heavy drops set him apart from most artists.

There was never dull moment on the production front for him during this difficult period either, scoring a global hit with ‘Heartbreak Anthem’ alongside Galantis and Little Mix and other smashes including ‘If You Really Love Me’, ‘Bed’ with Joel Corry, ‘Remember’ with Becky Hill, sending him to #9 most streamed artist on Spotify globally. He also released a remix of the summer hit ‘Love Tonight’ and a 2021 remix of his classic ‘Memories’ after it unexpectedly went viral on Tik Tok. He turned his hand to an official remix of the global Coldplay and BTS smash, ‘My Universe’. More recently he connected with Bebe Rexha, Ty Dolla $ign and A Boogie Wit Da Hoodie on ‘Family’, sounding off 2021 with yet another acclaimed single.
A master creative across genres, Guetta went from strength to strength with his underground-focused Future Rave project alongside Morten. Celebrating 10 years of his massive ‘Titanium’ collaboration with Sia, Guetta released a mind-blowing Future Rave remix, and he is also set to release a new Future Rave anthem ‘Alive Again’ on 3rd December. Additionally he returned to his uncompromising Jack Back alias for ‘I’ve Been Missing You’ with Ferreck Dawn and Guz and ‘Alive’ with Roland Clark and Fancy Inc.
With over 14 billion global streams, 50 million records sold worldwide and two Grammy awards to his name, David Guetta demonstrates time and time again why he is the most cherished electronic artist of our generation.
CONNECT W/ MORTEN
Instagram | Facebook | Spotify | Soundcloud | YouTube