Fridays at Hï Ibiza
3 June - 30 September 2022
Tickets on sale now at hiibiza.com/2022/david-guetta-future-rave
This summer, Hï Ibiza welcomes David Guetta and MORTEN’s ‘Future Rave’ for an exclusive 18-week residency. The officially recognised Number 1 DJ in the world and his Future Rave collaborator will present their explosive music experience at the award-winning super club, every Friday from June 3rd until September 30th, joined by an A-list cast of guests across the season. 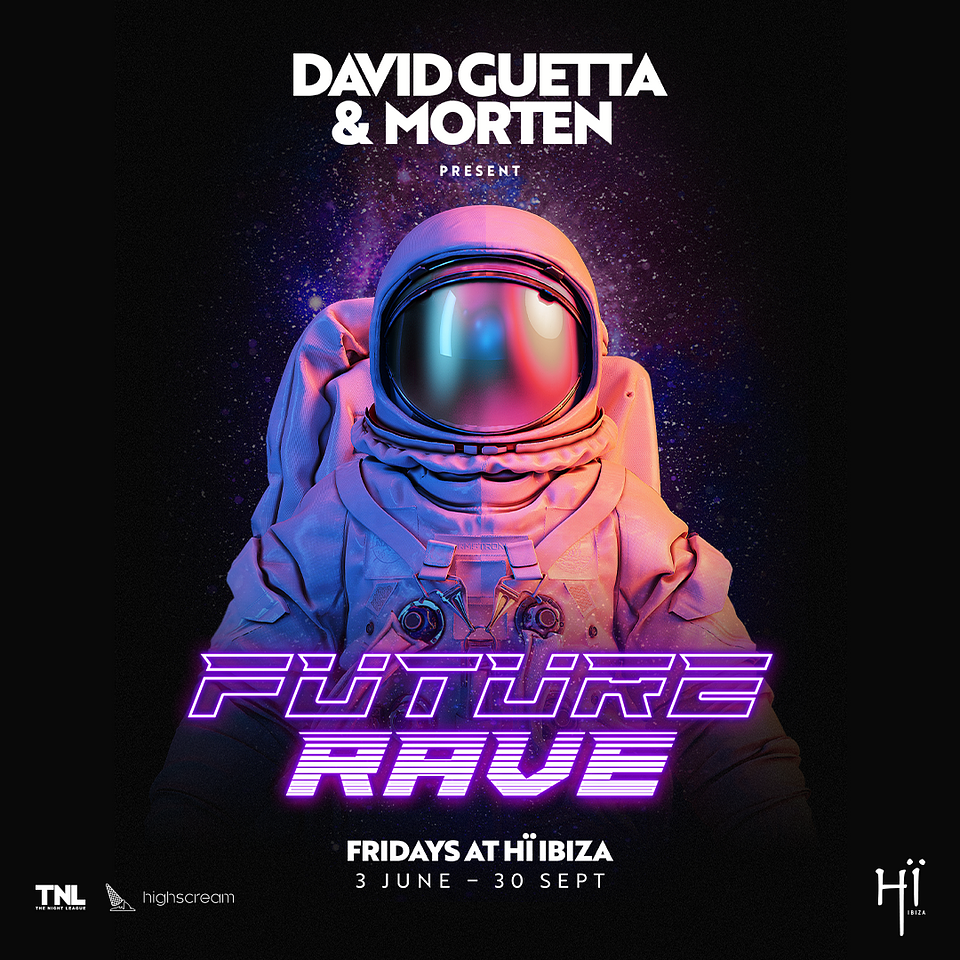 GRAMMY-Award-winning artist and dance music game-changer David Guetta joined forces with Danish DJ and producer MORTEN to launch Future Rave in 2020 and their unique concept has since gone stratospheric. Future Rave is now a globally recognised sound with its own playlists, garnering millions of streams, and is defined by mega-hits including their "Never Be Alone" with Aloe Blacc, "Dreams" (feat. Lanie Gardner), an epic remix of Sia's "Titanium” and massive new track “Permanence”.

Musically, Future Rave is a forward-thinking mix of underground sounds with festival-sized energy, making it perfect for Hï Ibiza’s vast main room, the Theatre. This fresh sound takes the punchy drums and fat bass of techno, euphoric melodies of progressive house and layers in with searing melodic arps that take you into another dimension. Add in an incredible high spec production at Ibiza's flagship nightclub and you can be sure of the most unforgettable dance floor adventure.

David Guetta says of the residency: “It is a real dream to bring the Future Rave experience to Ibiza this summer. Along with my friend Morten, we’ve created a new sound, a new movement, that’s rooted in the underground and made for the main stage at festivals. This is the start of something very special and we can't wait to be together with our fantastic fans in the amazing Hï Ibiza Theatre. The island has always held a special place in my heart making this residency even more meaningful.”

MORTEN comments: “My dream in life ever since starting out as a DJ in my teenage years has always been to have a residency on Ibiza. Future Rave having its own residency shows how far David and I have taken this new sound and how it is changing the industry. I want to thank David, the king of the island, for giving me the opportunity to stand next to him at Hï Ibiza this summer. This is something the little kid from Denmark is very proud of accomplishing and I can’t thank David enough for giving me this opportunity. See you guys for 18 weeks in a row at Hï Ibiza, let’s go!”

Created by The Night League, Hï Ibiza is known around the world for offering the most thrilling, explosive and authentic clubbing experience anywhere on the White Isle and after a two year break, the club’s return to action is set to be historic. Every element of the club has been meticulously designed to create the ultimate clubbing experience, from the epic, amphitheatre-inspired main room The Theatre with its futuristic lighting and LED screens, to the intimate Club room with its beaming lasers, all powered by a next level and bespoke L-Acoustics Soundsystem that delivers every sound with crystal clear clarity. Even the unisex bathroom, The Wild Corner, has a DJ booth that offers up surprise sets big name guests. There’s plenty of places to relax and enjoy a moment beneath the stars too, in the venue’s stunning outdoor spaces, The Magic Garden and The Secret Garden.

PRESS KIT
Future Rave at Hï Ibiza
Ushuaïa - Hï / USHUAÏA - HÏ can be written in uppercase or lowercase. Please always use umlaut on Ï.
ABOUT DAVID GUETTA
Musical trailblazer David Guetta is an international icon. Receiving his 10th GRAMMY nomination in 2021 for ‘Hero’, his collaboration with Afrojack, Guetta was also nominated for 3 Brit Awards, voted the world’s best DJ in the coveted DJ Mag ‘Top 100’ poll and the best electronic artist at the MTV Europe Music Awards, both for the second year running, capping off another incredible year for the dance music visionary. He won the award for Dance Act of the Year at the 2022 iHeartRadio Music Awards, and was also nominated twice in the Dance Song of the Year category for global smash hits ‘Heartbreak Anthem’ and ‘Bed’.

Maintaining an epic level of quality for his live streams during the pandemic and lockdown, he hosted his iconic United At Home series, a number of unforgettable concerts from Paris’ Louvre Museum, the Burj Khalifa in Dubai, the Icon Brickell in Miami, and atop the Rockefeller Center, raising $2 million in donations for numerous charities. With clubs and festivals finally open, Guetta performed an exceptional set at Ultra Music Festival in Miami, is set to start his Residency at Encore Beach Club in Las Vegas at the beginning of April, and will be appearing at more of the world's biggest festivals and events over the summer including Creamfields, Lollapalooza and in Ibiza, with many more to be announced.

So far in 2022 he has released a variety of collaborations including a unique remix of Kodak Black’s smash hit ‘Super Gremlin’ which saw him venture further into the hip-hop world, and ‘Silver Screen’ with Felix da Housecat and Miss Kittin, in honor of the 50th anniversary of the iconic Smiley brand. To round off an impressive first quarter of the year he has just released new single ‘What Would You Do’ with Joel Corry and a new Jack Back offering, ‘Feeling’.

Despite the global challenges of the last couple of years there has never been a dull moment, with him scoring a global hit with ‘Heartbreak Anthem’ alongside Little Mix and Galantis and other smashes including ‘If You Really Love Me’, ‘Bed’ with Joel Corry, and ‘Remember’ with Becky Hill, sending him to #9 most streamed artists on Spotify globally. He also released a 2021 remix of his classic ‘Memories’ after it unexpectedly went viral on Tik Tok and turned his hand to an official remix of the global Coldplay and BTS smash, ‘My Universe’.

A master creative across genres, Guetta has gone from strength to strength with his underground-focused Future Rave project alongside Morten, releasing the atmospheric ‘Permanence’ as his first single of 2022. Additionally he returned to his uncompromising Jack Back alias for ‘Supercycle’ with Citizen Kain and Kiko. Celebrating 10 years of his massive ‘Titanium’ collaboration with Sia, Guetta released new remixes, including a mind-blowing Future Rave version.

With over 14 billion global streams, 50 million records sold worldwide and two Grammy awards to his name, David Guetta demonstrates time and time again why he is the most cherished electronic artist of our generation.

ABOUT MORTEN
MORTEN has been taking over the industry for the past two year with his innovative new ‘Future Rave’ sound together with good friend David Guetta, inspiring DJs worldwide and creating an entirely new culture. He has gathered an audience of 4.7M monthly listeners on Spotify alone, releasing hit after hit with the Guetta-collab being on top 5 of the most played records in the world by DJ’s for 7 weeks. As last year’s highest new entry in the DJ Mag Top 100, landing at #20 in the 2021 1001 Tracklists ranking, a residency at Hï Ibiza this summer, and shows on the mainstages of EDC Las Vegas and Tomorrowland, MORTEN does not need to assert his spot anymore. His ability to transform his music between melodic, captivating vocals and his well known, recognized snare and bass heavy drops set him apart from most artists.

ABOUT HÏ IBIZA
Since opening its doors for the very first time in 2017, the multi-award-winning Hï Ibiza has played host to many of the biggest names on the electronic music scene. Welcoming thousands of party revellers from all around the world each week throughout the season, Hï Ibiza has fast become one of the most sought-after tickets on the island. With world-class residents, state-of-the-art design and sound, plus a commitment to putting the clubber at the centre of the experience, the groundbreaking club has proved itself a force to be reckoned with.

ABOUT THE NIGHT LEAGUE
Founded in 2001 by events entrepreneur Yann Pissenem, The Night League is a 360 music and entertainment company, dedicated to every facet of event and venue management. For over two decades, The Night League has created and delivered world-class music experiences through globally-renowned in-house brands Ushuaïa Ibiza, Hï Ibiza, ANTS and Children of the 80's, as well as collaborating with some of the world's most influential artists, festivals and events to create bespoke, pioneering concepts. From our event producers, venue operators, booking managers, artist management, marketing and design teams, TNL consistently goes beyond expectations, fusing music and art to deliver profound experiences that invigorate audiences around the world