Gianluca Vacchi: Mucho Más will premiere May 25, exclusively on Prime Video in more than 240 countries and territories worldwide 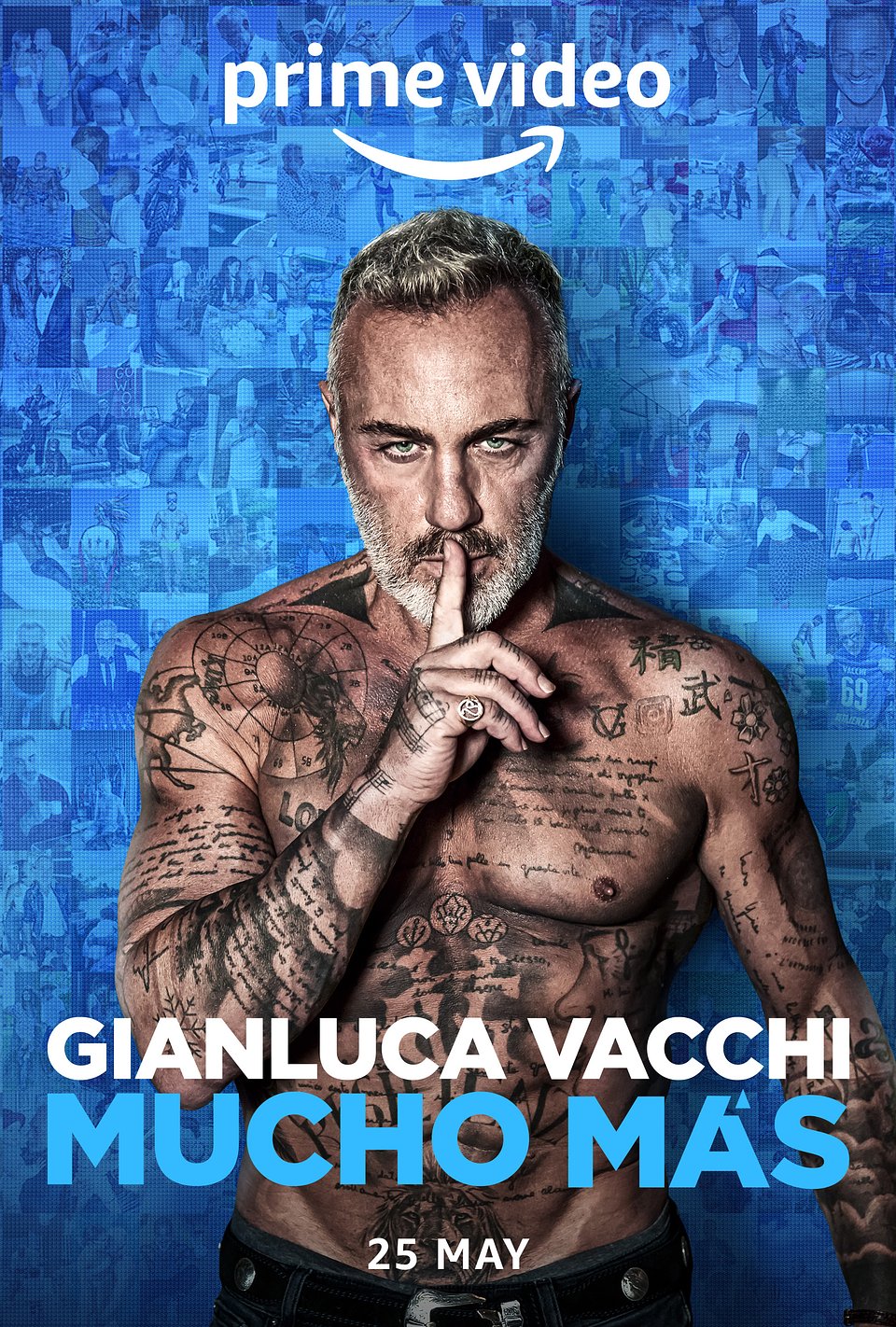 Gianluca Vacchi: Mucho Más offers viewers a glimpse into the world of internationally renowned entrepreneur, influencer, and DJ Gianluca Vacchi. Skyrocketing as a social phenomenon thanks to his viral videos, which generated millions of views, Vacchi boasts over 22.2 million followers on Instagram, 21.5 million on Tik Tok, 3 million on Facebook, and is considered the “King of Social Media”, reaching an overall audience of 46.6 million people around the world. The documentary unveils the man behind the character, with Vacchi revealing important aspects of his life and childhood, and the deep relationships that bind him to his mother, friends, and partner, model Sharon Fonseca, who gave him the greatest gift of his life: baby Blu Jerusalema.
“We are excited to take customers into the world of Gianluca Vacchi with this stunning documentary. Building on the success of recent Italian Original series’ like The Ferrangnez; and our Laura Pausini film, we hope to show a side of Gianluca that his fans have not seen before,” said Georgia Brown, head of European Originals, Amazon Studios. “I’m delighted to see our Italian slate grow and match our ambition for bringing to the screen world-class content from Europe’s most exciting talent.”
“We are happy to announce the new Italian Original documentary starring Gianluca Vacchi, one of the most eclectic and discussed characters of the contemporary scene,” says Nicole Morganti, head of Italian Originals, Amazon Studios. "This project confirms, once again, that Prime Video strives to create high-quality content with unprecedented and unfiltered access to characters with an extraordinary following. We want to thank Gianluca Vacchi for the generosity with which he embarked on this journey with us, putting himself out there and sharing, as never before, unreleased aspects of his private life, showing that behind the social image there is mucho más."
Gianluca Vacchi: Mucho Más is produced in Italy by Masi Film and Indigo for Amazon Studios and will be available exclusively on Prime Video from May 25, 2022.
Gianluca Vacchi: Mucho Más will join the thousands of TV shows and movies in the Prime Video catalogue, including the Italy Original productions Bang Bang Baby, Laura Pausini – Piacere di conoscerti, The Ferragnez - La serie, All or Nothing: Juventus, Anni da cane, Dinner Club, Vita da Carlo, FERRO, Celebrity Hunted – Caccia all’uomo S1 and S2, and LOL: Chi ride è fuori S1 e S2; award-winning and critically acclaimed global Original series such as Fleabag and The Marvelous Mrs. Maisel and hits like Jack Ryan, The Boys, Borat – Seguito di film cinema, Il principe cerca figlio, Senza Rimorso, Good Omens and Carnival Row, in addition to all licensed contents available in over 240 countries and territories worldwide, and exclusive live coverage in Italy of the 16 best Wednesday night matches of the UEFA Champions League, as well as the UEFA Super Cup, for three seasons from 2021/22. Other Original series already announced are Bang Bang Baby, The Bad Guy, Everybody Loves Diamonds and Prisma.
Prime members will be able to watch Gianluca Vacchi: Mucho Más via the Prime Video app available on smart TVs, mobile devices, Fire TV, Fire TV stick, Fire tablets, Apple TV, game consoles, Chromecast and through Vodafone TV. On the Prime Video app, viewers can download all episodes on their mobile devices and tablets and watch anywhere offline at no additional cost, all part of a Prime membership which costs €36/year. New customers can find out more at www.amazon.co.uk/prime and subscribe to a free 30-day trial.
Prime Video
Prime Video offers customers a vast collection of movies, series, and sports— all available to watch on hundreds of compatible devices.
Prime Video is just one of many shopping and entertainment benefits included with a Prime membership, along with fast, free shipping on millions of Prime-eligible items at Amazon.com, unlimited photo storage, exclusive deals and discounts, and access to ad-free music and Kindle ebooks. To sign up or start a 30-day free trial of Prime, visit: amazon.com/prime.
About Gianluca Vacchi
Entrepreneur; social media star; DJ; producer; Gianluca Vacchi is a man who triumphs whatever he puts his hands to. His athletic, hedonistic, daredevil playboy antics on social media made him a star whose charisma people were naturally drawn to, and after amassing an enormous following he decided to follow his dreams in music. With the releases of ‘Love’ with Sebastián Yatra, ‘Subelo y Bajalo’ in collaboration with Nfasis, ‘Mueve’ with non-other than Nacho, Becky G, and MC Fioti, and ‘Para’ ft. Ir Sais, Gianluca has quickly become a major force in the music industry. At the head of a social media empire, Gianluca Vacchi and partner Sharon Fonseca have proven that nothing can resist their contagious positive energy and endless creativity. The ambitious couple succeeds in everything they undertake both in business and in life, all while discovering parenthood and entertaining millions around the world. With an astounding success story and an equally lavish lifestyle, they have the capacity and all the qualities to be one of the world’s strongest and most inspiring power couples.
About Amazon
Amazon is guided by four principles: customer obsession rather than competitor focus, passion for invention, commitment to operational excellence, and long-term thinking. Amazon strives to be Earth’s Most Customer-Centric Company, Earth’s Best Employer, and Earth’s Safest Place to Work. Customer reviews, 1-Click shopping, personalized recommendations, Prime, Fulfilment by Amazon, AWS, Kindle Direct Publishing, Kindle, Career Choice, Fire tablets, Fire TV, Amazon Echo, Alexa, Just Walk Out technology, Amazon Studios, and The Climate Pledge are some of the things pioneered by Amazon. For more information, visit amazon.com/about and follow @AmazonNews.
CONNECT W/ GIANLUCA VACCHI
Facebook I Instagram | Spotify | Soundcloud | TikTok
CONNECT W/ SHARON FONSECA
Instagram | Facebook | TikTok