‘Satisfaction’ lives on, recently surpassing 100 million Youtube plays and standing strong as the 17th most played track at Tomorrowland, decades after its original release 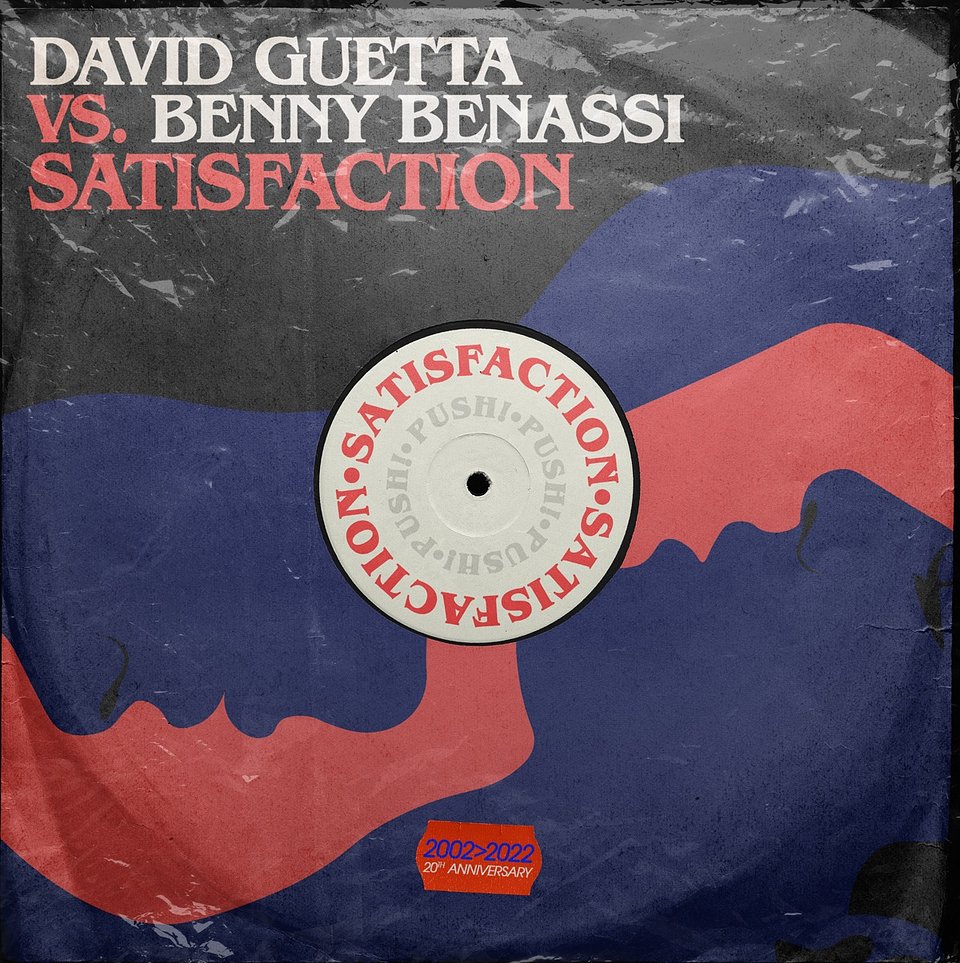 LISTEN HERE
20 years after the release of the genre-defining single “Satisfaction,” the Grammy Award winning industry icons Benny Benassi and David Guetta have joined forces to give the legendary beat a new lease on life. Revitalized for the modern mainstage, the newest rendition of “Satisfaction” celebrates the storied original release with a fresh dose of energy, borrowing influences from the surging sounds of David Guetta’s Future Rave while still paying homage to the instantly recognizable and equally undeniable synth hook of Benassi’s 2002 original. Celebrate 20 years of “Satisfaction” on August 12th when the new release lands on the Warner Music Group backed Spinnin’ Records!

“I actually first remixed the track as a sound design exercise for myself, but I liked the sound of it so much that I started playing it in my sets. The reactions of the crowd were so crazy that I had to release it!” - David Guetta

“I’ve known David for over 20 years. I remember I would get messages from resident DJs in Ibiza who heard David playing Satisfaction at Pacha two decades ago! So he was definitely one of the very first supporters of the original version. And when he played me his initial idea for this new version, I totally loved it. He’s made it current again, it’s very Ibiza with a really great intro and it’s perfect for today’s DJ sets. I played it out for the first time in Mykonos and people went crazy. Everyone was asking me what it was. I am really excited about this collab!” - Benny Benassi

Considered one of dance music’s true living legends, Italian superstar Benny Benassi pioneered the modern electro-house sound with the original 2002 release of “Satisfaction.” In a time when dance singles were categorized as either techno, house, or trance, Benassi challenged the sonic status quo, championing a neo-electro sound along the way. In the 20 years since its release, “Satisfaction” has climbed charts worldwide and single-handedly pushed dance music to new heights, straight into the commercial and top 40 mainstream worlds. More importantly, “Satisfaction” has done what many chart topping hits cannot by standing the test of time, ascending beyond the confines of dance music and into global culture. Since the beginning of the summer, David Guetta and Benny Benassi’s latest rendition of satisfaction has helped set dance music’s sonic agenda, being spun by many of the scene’s most trendsetting DJs on the world’s biggest stages.

Like Benny Benassi, David Guetta is a DJ who truly needs no introduction. With a penchant for reinventing his sound time after time, the French DJ and producer has been one of dance music’s most trusted guiding lights for years. The careers of David Guetta and Benny Benassi share unique parallels, both being responsible for introducing dance music to new demographics and generations while also refusing to have their sounds pigeonholed by the industry. Recent times have seen Guetta grab the reins of his sound, pushing the boundaries of the scene with his aptly titled Future Rave sound. Alongside musical cohort MORTEN, David Guetta has elevated dance music to new heights, not only through boundary-pushing releases like “Permanence” and “Alive Again,” but with their coveted weekly residency at Hï  Ibiza. Guetta is the only DJ in Ibiza to have 2 residencies on the island this summer, with his legendary ‘F*** Me I’m Famous!’ party also taking place at Ushuaïa. Most recently, David Guetta returned to the airwaves with a slew of commercial hits, led by the dangerously danceable “Crazy What Love Can Do,” which just crossed the 100 million Spotify streams mark, and the equally infectious Lewis Thompson collaboration, “Take Me Back.”

Join two icons of the scene in Benny Benassi and David Guetta as they celebrate 20 years of “Satisfaction.” Feel satisfied when the new release lands via Spinnin’ Records on August 12th.
About David Guetta
Musical trailblazer David Guetta is an international icon. Receiving his 10th GRAMMY nomination in 2021 for ‘Hero’, his collaboration with Afrojack, Guetta was also nominated for 3 Brit Awards, voted the world’s best DJ in the coveted DJ Mag ‘Top 100’ poll and the best electronic artist at the MTV Europe Music Awards. He also won the award for Dance Act of the Year at the 2022 iHeartRadio Music Awards, capping off another incredible 6 months for the dance music visionary with a total of 3 awards, as well as being nominated for 1 award at this year’s Billboard Music Awards.

So far in 2022 he has released a variety of collaborations including his remix of Dua Lipa and Megan thee Stallion’s ‘Sweetest Pie’ and a unique street house remix of Kodak Black’s smash hit ‘Super Gremlin’, which saw him venture further into the hip-hop world. To round off an impressive first quarter of the year he has released ‘What Would You Do’ with Joel Corry and the huge hit ‘Crazy What Love Can Do’ with Becky Hill and Ella Henderson.

A master creative across genres, Guetta has gone from strength to strength with his underground-focused Future Rave project alongside Morten, releasing the atmospheric ‘Permanence’ as his first single of 2022. Additionally he returned to his uncompromising Jack Back alias for ‘Feeling’. Celebrating 10 years of his massive ‘Titanium’ collaboration with Sia, Guetta released new remixes, including a mind-blowing Future Rave version. With over 14 billion global streams, 50 million records sold worldwide and two Grammy awards to his name, David Guetta demonstrates time and time again why he is the most cherished electronic artist of our generation.
About Benny Benassi
With an impressive career spanning more than twenty years, Benny Benassi is one of the most successful, influential record producers and djs of all time. His springboard to fame came in the form of his seminal crossover hit Satisfaction, released in 2002. Topping the charts all over Europe, which then crossed the pond into North America, this iconic, ground-breaking, genre-defining track paved the way for his debut album in 2003, Hypnotica, which among countless other accolades, landed him the title of European Border Breaker Award, for the most record sales by an Italian artist outside Italy.

In 2008, Benny released his next artist album, Rock N Rave, before going on to win a Grammy award for his remix of Public Enemy’s Bring The Noise, one of the first recordings ever to combine European electro-house beats with American hiphop vocals, cementing Benny’s status as a trailblazing pioneer of the commercial electronic music scene. And, in 2011 he released his critically acclaimed third album, Electroman, which included worldwide smash hits Beautiful People with Chris Brown and Cinema with Gary Go. Once again, Benny made history by discovering a young, and at the time, unknown artist named Skrillex who he enlisted to remix Cinema and successfully brought dubstep into the mainstream. The remix won another Grammy Award and remained in the Top 40 charts for four continuous years.

Since then, Benny has headlined the biggest festivals around the world including, EDC, Coachella, Tomorrowland and Ultra Music Festival to name a few.  As Benny’s star continued to rise, he teamed up with Madonna and produced the single Girl Gone Wild plus several other tracks on the MDNA album, which fully confirmed Benny’s place as one of the very best producers in the world! Additionally, there is a long, rich list of other A-list artists Benny has collaborated with to feature on his records that deserve mention - from Lil Yachty and Jeremih to John Legend, Ne-Yo, T-Pain and Serj Tankian from System of a down, the wide ranging group further illustrates the full scope of Benny’s influence.

As well as his own production, Benny has always aimed to bring his sound to an array of audiences. This includes his flurry of high-profile remixes for the likes of Bob Marley & The Wailers, Giorgio Moroder and the Rolling Stones, amongst a laundry list of others.
CONNECT WITH DAVID GUETTA
Facebook I Instagram I Twitter | Website I YouTube | Spotify
CONNECT WITH BENNY BENASSI
Facebook I Instagram I Spotify | Website | YouTube
NOTE FOR EDITOR / NOT FOR PUBLICATIONFor interview requests and other press inquiries, please reach out to Anabelle Kemplen, Jaëlle-Laurence Günther, or Josh Stewart - The Media Nanny

Following the huge success of the original release, Topic and A7S’ single ‘Kernkraft 400 (A Better Day)’ gets a new lease of life this month thanks to a storming remix from UK tastemaker MistaJam.Taking all the charms of the original—the enormous riff from Zombie Nation’...

Today, multi-platinum selling German/Croatian DJ and producer Topic has released his remix of Lewis Thompson & David Guetta’s recent single ‘Take Me Back’.Topic is quickly becoming one of the most in demand names in dance music and laces his rework with his signature...