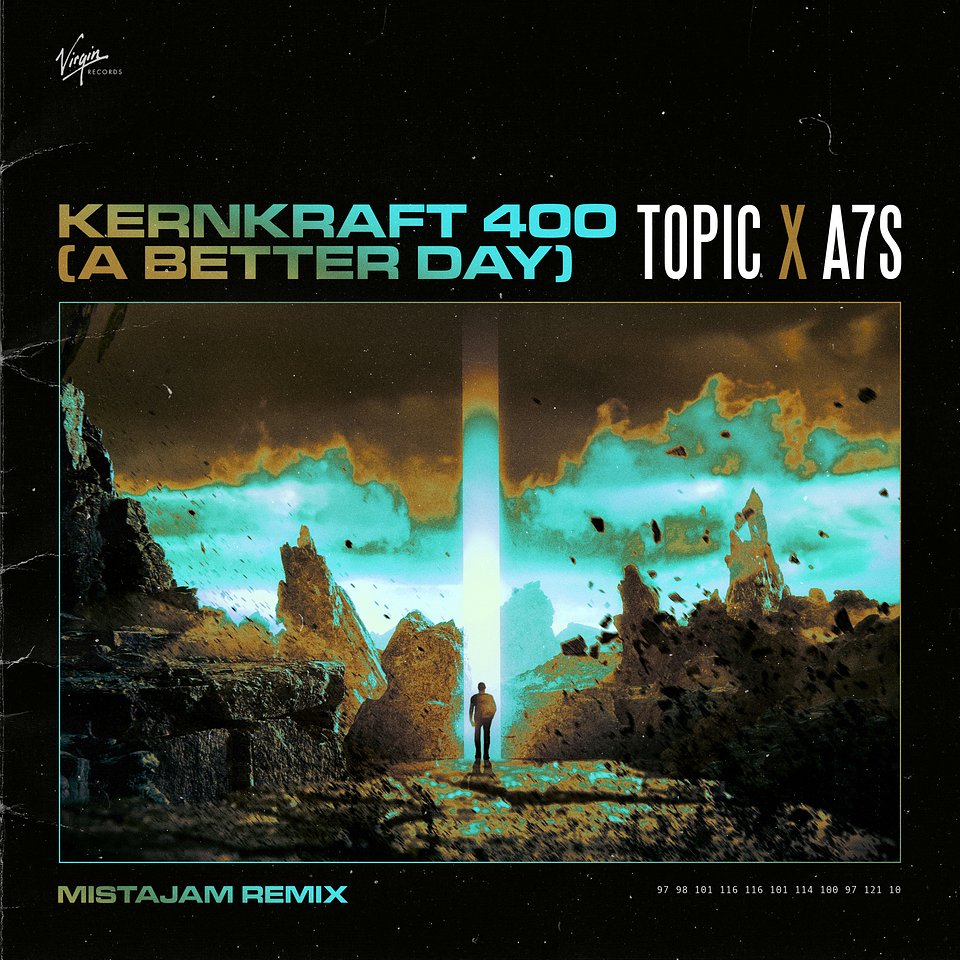 LISTEN HERE
Following the huge success of the original release, Topic and A7S’ single ‘Kernkraft 400 (A Better Day)’ gets a new lease of life this month thanks to a storming remix from UK tastemaker MistaJam.

Taking all the charms of the original—the enormous riff from Zombie Nation’s legendary ‘Kernkraft 400’ and the soaring vocals of Topic and A7S’ revision—MistaJam takes it into a more pumping direction, with some thick bass tones and a stripped-back approach making it perfectly tailored to the dancefloor.

Originally known for his track-breaking reputation ruling the airwaves of UK dance radio, MistaJam has moved into songwriting and production in a big way since 2018. His massive collaboration with David Guetta and John Newman ‘If You Really Love Me (How Will I Know)’ has passed 150 million streams, earning him a Silver Record certification from the British Phonographic Institute. This is the second time he’s remixed Topic, after his stellar rework of his Clean Bandit & Wes Nelson collab ‘Drive’ last year.

Topic and A7S’ original version has been a true smash, reaching #26 in the German Top 40 Chart and #17 in iTunes, and picking up over 34 million streams to date. It peaked at #79 in the Global Shazam Charts, soared to #25 in the Spotify Top 200 in Germany, and has had over 55,000 radio plays in 61 countries. Simply put, it’s been inescapable this year.
About MistaJam
MistaJam has cemented himself as one of British music’s most influential characters. A cornerstone, tastemaker, and global track breaker in his career - not only as a broadcaster and radio personality but also as a producer, DJ, songwriter, and a trusted cultural trailblazer for all to follow. He started this year in fine style, celebrating a BPI-certified silver record, collaborating with David Guetta & John Newman on ‘If You Really Love Me (How Will I Know)’, and breaking the 150 million cross-platform streams benchmark all while establishing Capital Dance - a brand new radio station Jam launched with Global. MistaJam is a multiple award winner and a passionate advocate for the power of Dance music. Equally passionate in his quest to help uplift others, he is an ambassador for the mental health charity CALM.

About Topic
Making global impact with his worldwide hits and own emotional yet exhilarating dance sound, it’s fair to say that Topic is a superstar DJ and hotly in-demand producer. His numbers speak for themselves and are eye-popping by anyone's standards. The German-Croatian has amassed over 1 billion streams in 2021 alone, he has gold, double diamond, triple, quadruple, and even decuple platinum certifications in 28 countries around the world to his name and holds a steady spot in the Top 10 of Spotify's Global Top 200. He worked with GRAMMY®-nominated rapper Lil Baby, Diamond-selling and two-time GRAMMY®-nominated Bebe Rexha, British band Clean Bandit, and DJ-favorite Becky Hill, as well as Fifth Harmony singer Ally Brooke, and many more, all with unforgettable results. The collaborative tracks Topic produces have achieved huge commercial success: he landed in the Top 5 in the UK Official Singles Chart and the Billboard Hot 100, scored number ones on the Mediabase U.S. dance radio, iTunes and the Global Top 200 Shazam and Spotify charts, and won high profile awards and nominations including the MTV Europe Music Awards in 2016, Teen Choice Awards in 2018, Best Dance Act at the Los 40 2020 Music Awards, the Billboard Music Awards 2021, The 2022 Brit Awards for International Song Of The Year, and many more. You can be sure that Topic's signature sounds will always enrich and uplift in uniquely wistful ways.
CONNECT W/ MISTAJAM
Instagram | Facebook | TikTok | Spotify | SoundCloud | Apple Music | YouTube | Twitter
CONNECT W/ TOPIC
Instagram | Facebook | TikTok | Spotify | SoundCloud | Apple Music | YouTube